Necrotizing enterocolitis (NEC) primarily affects premature newborns, occurring in 7–10% of very low birth weight infants, from 2 weeks to 2 months of age, with an incidence inversely related to gestational age (Patel et al. 2015). It is associated with a mortality as high as 30%, and survivors face an increased risk of serious health complications including short gut syndrome and neurological sequelae (Neu and Walker 2011). Preterm infants are characterized by a lack of microbial diversity and an increased risk of pathogenic colonization and an increased concentration of Gram-negative facultative bacteria and a decrease in obligate anaerobes, may play a critical role in the pathogenesis of NEC (Warner et al. 2016).

Intestinal homeostasis can be achieved through the establishment of a symbiotic relationship between the colonizing bacteria and the intestinal epithelial and associated lymphoid tissue that, in turn, mediates the beneficial effects for the mammalian host and promotes tolerance in the gut. On the contrary, inadequate colonization leading to a dysbiosis of intestinal microbiota, characterized by a preponderance of pathobionts, induces a more pronounced pro-inflammatory response and an increased tendency toward an immune dysfunction (Tsilingiri and Rescigno 2013).

Moreover, the intestinal barrier, which protects against potentially harmful organisms and includes several components such as the mucus coating, a layer of enterocytes strictly connected by a system of intracellular and membrane spanning proteins and an associated immune cells network, is still immature in preterm infants and, hence, contributes to their increased susceptibility to NEC development (Isani et al. 2018).

Experimental models have demonstrated that NEC development is characterized by a reduction in Tregs and an increase in Th17, which, in turn, are associated with intestinal injury and increased enterocyte apoptosis (Hodzic et al. 2017).  Moreover, the role of TLR4 in the pathogenesis of NEC has been widely investigated. Specifically, TLR4 recognizes lipopolysaccharides and activates Nuclear Factor-kB (NFkB), leading to a pro-inflammatory cascade.

Administration of probiotics has been proposed as a preventive strategy in decreasing the risk of developing necrotizing enterocolitis in preterm infants (Patel and Underwood 2018). Probiotics are defined as live microorganisms that confer a health benefit to the host when ingested in adequate amounts likewise commensal bacteria do (Hill et al. 2014). Recent data, however, indicate that not all the health promoting effects are directly related to the viability status of the bacteria. Hence, new terms such as “POSTBIOTICS” have been developed which denote that bacterial viability is not always required for inducing health beneficial effects, offering a new scenario within the field of functional foods. Postbiotic has been defined as any soluble factor resulting from the metabolic activity of a live bacteria or any released molecule capable of providing health benefits through a direct or indirect mechanism (Tsilingiri and Rescigno 2013; Aguilar-Toaláa et al. 2018). Moreover, postbiotics offer a safety advantage over probiotics since they decrease the risk for microbial translocation and infection and prevent potential detrimental effects shown by probiotics within an already pro-inflammatory context (Tsilingiri et al. 2012).

Recent advances in the comprehension of the postbiotic biological effects and related mechanisms indicate that postbiotics are a promising effective preventive strategy against NEC while avoiding the risk of administering live microorganisms to preterm infants that could translocate and cause infection.

Postbiotics exert different bioactive effects, including modulation of immune function, anti-inflammatory response, and antimicrobial activity, comprising several different molecules that can be classified according to their composition into lipids, proteins, carbohydrates, vitamins/ cofactors, organic acids, and complex molecules such as peptidoglycan-derived muropeptides and lipoteichoic acids. Studies conducted using lactobacilli strains, indicate that many of the beneficial biological effects associated with the gut microbiota are driven by bacterial metabolic by-products (Aguilar-Toaláa et al. 2018).

However, the key role played by intestinal epithelial cells in modulating the gut immune response has now increasingly emerged. Indeed it has become clear that intestinal epithelial cells mediate the delivery of signals between the gut and the host immune cells through the production of mediators, including cytokines, chemokines, and antimicrobial peptides, in order to prevent the overgrowth of potentially pathogenic bacteria and maintain a tolerance to commensal bacteria (Vancamelbeke and Vermeire 2017).

In this context increasing evidence indicate that many postbiotic components are able to enhance the intestinal barrier function  (Tsilingiri and Rescigno 2013; Aguilar-Toaláa et al. 2018)

Mileti et al. (2009) were among the first to demonstrate that most of the anti-inflammatory activ- ity exerted by Lactobacillus paracasei B21060 was associated to the metabolites released in culture, which downregulated the production of IL-12p70 and increased production of IL-10.

Consistently with these findings, Tsilingiri et al. (2012) have suggested that postbiotics may represent a potential treatment of inflammatory bowel disease. Specifically, it has been demonstrated that Lactobacillus paracasei B21060 culture supernatant protects against Salmonella invasion by reducing NFkB activation in a human organ culture system and can downregulate pro-inflammatory pathways active in inflammatory bowel disease tissue (Tsilingiri et al. 2012; Zagato et al. 2014).

The anti-infective and immunomodulatory effects demonstrated with the use of cow’s milk fermented with Lactobacillus paracasei CBA L74 have been confirmed in a subsequent clinical trial (Corsello et al. 2017). Moreover, Paparo et al. (2018) found that, through a direct interaction with human enterocytes, fermented milk with Lactobacillus paracasei CBA L74 stimulates the synthesis of beta-defensin and cathelicidin, in association with a modulation of Toll-like receptor pathway.

Recent advances in the comprehension of the Postbiotic biological effects and related mechanisms indicate that Postbiotics are a promising effective preventive strategy against NEC while avoiding the risk of administering live microorganisms to preterm infants that could translocate and cause infection. 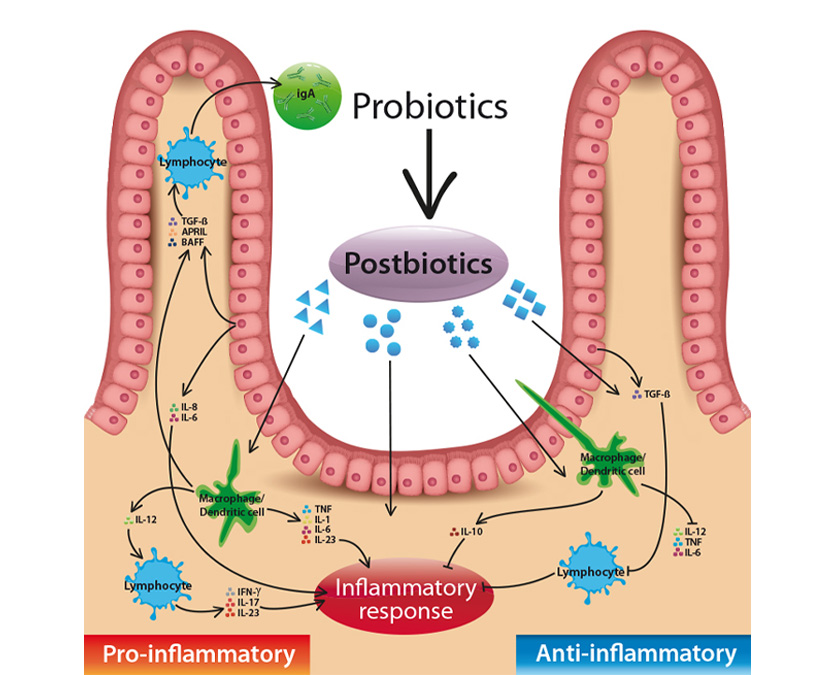